The Possible Underlying Cause Behind Acne and Weight Gain

If you have recently gained weight and started breaking out, there’s no need to panic, especially if you’re in your teens. Although the diet and skincare industries would have you believe otherwise, weight gain in your teens is normal and healthy, and acne is just part of the hormonal shifts you’re going through right now. It’s incredibly common for acne and weight gain to go together due to the connections between hormones, skin, and weight.

In January 2012, the Archives of Dermatology published a paper entitled “A Population-Based Study of Acne and Body Mass Index in Adolescents.” Researchers in Denmark, Norway, the USA, and China looked into the relationship between weight gain and acne in over 3500 teens aged 18 or 19 who lived in Oslo. ⚖️ The epidemiologists concluded that with higher weight, the frequency of acne increased, too. But what is the real relationship between acne and weight gain? 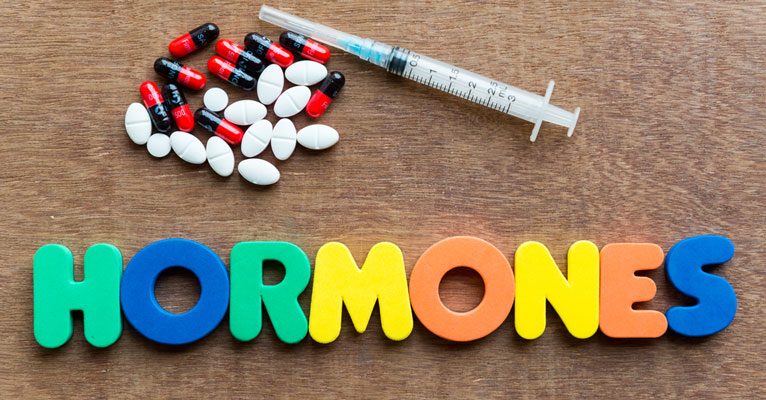 Hormones can be the main cause of acne and weight gain in teenage girls.

Although acne and weight gain are incredibly common in all teenagers, they can be especially problematic for teenagers with ovaries. 👧🏻👧👧🏽👧🏾 This is because both weight gain and acne are related to the function of the ovaries, and that metabolism in the ovaries is related to another phenomenon called insulin resistance.

Let’s start at the end and work back to the beginning to understand the problem.

All Acne Starts with Clogged Pores

There are lots of factors that contribute to acne, but acne does not occur when pores are not clogged. Pores get clogged with sebum (the oil produced by the skin) due to excessive growth of skin cells along the opening of the pores.

As skin grows, it pushes outward. The very outermost layer of skin cells dissolves in keratin protein and ceramide “glue” to form an impermeable layer against water and that dirt, toxins, and bacteria don’t get inside. As more skin cells mature and die, the outer flakes fall off and, for the most part, are easily removed by the flow of air over the skin and simple washing of the skin.

Inside a pore, however, the natural direction for a dead skin cell in the lining of the pore is to move in rather than out. 🔬 Microscopic, invisible flakes of skin accumulate in the bottom of the pore and are pushed out as the pore releases sebaceous oils.

When testosterone levels are high, the pores make more oil. It can flow in such a volume that it pushes against the bottom of the pore. This makes the neck of the pore narrower.

The flakes of skin that the oil would ordinarily deliver to the surface of the pore get stuck, and the pore fills with oil. The opening of the pore gets still narrower, and skin grows over the pore, trapping the dead skin cells and sebum inside. At first this forms a whitehead. If there is just enough oxygen in the pore to oxidize the sebum it contains, it can turn into a blackhead.

If acne bacteria trapped inside the pores grow to sufficient numbers that the immune system attacks them with inflammatory compounds, the result can be a pimple or even a nodule or cyst.

Testosterone is not exclusively a product of the male body. Women’s bodies make testosterone, too. In small amounts testosterone fuels the female libido. 👒 In larger amounts it can have the same effects as it does in males, such as the growth of hair and the increased production of oil in the sebaceous glands of the skin. More oil, larger and darker blemishes.

A woman’s body makes testosterone along with other hormones in the ovaries. And that’s where there is a connection to the effects of insulin.

The Relationship Between Acne, Weight Gain, and the Ovaries

Insulin carries glucose into cells all over the body, including the ovaries. In most of the rest of the body, however, cells can shut down their glucose receptors when blood glucose levels are high. This protects them from an influx of glucose sugar that has to be metabolized to produce energy. Limiting the entry of glucose protects the cell from the free radicals that are released when it “burns” excess sugar.

The ovaries don’t have a mechanism to shut down their glucose receptors and become insulin resistant. When the rest of the body rejects sugar, the ovaries are flooded with sugar. They make large amounts of all of their hormones, including testosterone. This is what causes acne.

But it’s more than just eating too much that causes weight gain. The problem is that insulin resistance primes fat cells to store every possible extra calorie.

At the same time, the pancreas senses that blood sugar levels have gone up and responds by releasing more insulin. Most of the body becomes still more insulin resistant, but the ovaries receive even more glucose. The extra insulin parks fat inside fat cells about 300 times more efficiently than it stores fat. 🏋️‍♀️ Insulin resistance ensures that fat is stored quickly and efficiently, before it’s possible to work it off.

Insulin resistance can occur on its own, but if you have ovaries and symptoms of insulin resistance, you may want to talk to your doctor about Polycystic Ovarian Syndrome (PCOS). PCOS is an under-researched, poorly understood hormonal condition that nevertheless affects an estimated 1 in 10 women of childbearing age. One popular, though not universal, symptom of PCOS is insulin resistance and the resulting weight gain/fluctuations and acne. If you experience unusual hair loss or hair growth, irregular and/or painful periods, and depression along with weight fluctuations and acne, you should discuss PCOS with your doctor.

Because the condition is so under-researched, some doctors are unfamiliar with PCOS or reluctant to give it as a diagnosis. If your doctor dismisses your concerns, be sure to seek a second opinion. 🩺 You deserve to have your symptoms treated and taken seriously.

Does That Mean Diet and Acne Are Related?

The short answer is: probably, but researchers aren’t sure exactly how. The long answer is complicated and is best explained in our other article: Foods That Cause Acne– And Some Foods That Help Fight It.

Essentially, pinpointing the connection between diet and any other factor, like acne, is tricky because diet studies involve so many factors that are hard or impossible to track.

If you’ve noticed that your weight gain and acne tend to go together, and you’ve ruled out PCOS as a possible reason, then your skin may benefit from reducing your sugar intake. However, we want to emphasize that diet is only one factor in acne treatment, and sticking to the “perfect” diet cannot clear your skin.

Restrictive diets typically cause a great deal of stress and can even lead to serious mental health conditions, like eating disorders, anxiety, and depression. It is far better for you as a person to cut back slightly on your processed sugar intake rather than trying to cut it out entirely.

Even if your acne is related to insulin resistance and diet, there are other ways to improve your skin as well. 💧🤗 Daily cleansing with a gentle face wash can make a world of difference, as can finding the right products for your skin type.

Comments 3
Related acne articles:
Weight Loss Diets And Acne Vulgaris
January is the biggest month of the year for weight loss diets. Hundreds of millions of holiday party goers around the world pack in extra...
Everything You Need to Know About The Connection Between Estrogen and Acne
Tens of millions of women in their reproductive years have acne that comes and goes about once a month, along with the fall and rise...
Comments (3)
Add Comment

Great site and info..keep up the good work..it is so true about the weight gain problem!

I have a teenage daughter who has been an athlete all her life and now has been plagued with becoming overweight and acne all at the same time. Although she works out all the time, she was getting really frusterated with the weight gain. At her age it can be devastating as kids can be cruel. Thank you for the helpful information...I don't think we even thought of the sugar intake and we will have to change her eating habits at this point and see what happens from here....thanks again

I recently got married and started to gain weight. The sugar in take is also, and now that i think of it, it all makes sense. Im working out nowadays, at the same time I'll reduce my sugar in take, Hopefully it will work out for me. Your article is the first that I came across, that actually makes sense to me! Good job