Finding the Truth About Milk and Acne

We can’t discuss all the legitimate, questionable, and totally out-there claims both for and against consuming dairy products. But we can shed some light on the issue of whether drinking milk may cause acne. 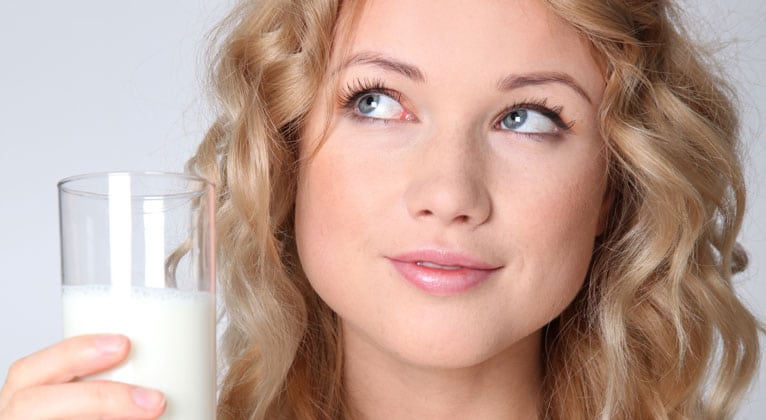 In the 1990’s, a team of researchers at Brigham and Women’s Hospital and the Harvard School of Public Health as well as other prestigious institutions around the world conducted the Growing Up Today Study, which tracked diet and health of 7,843 boys and 9,016 girls through their teen years until they reached adulthood.

Acne researchers also considered the teens’ answers to questions about chocolate, French fries, and pizza, since these foods have also been linked to acne.

In 1999, the researchers asked about height, weight, and (in girls) contraceptive use, as well as a question about acne: “Compared to other people you know, how would you describe your acne.” Multiple choice responses included:

Then the researchers looked at all the data together. For teenaged girls, two surprising facts emerged:

The Harvard researchers did not track down whether milk from cows treated with recombination (artificial) bovine growth hormone had any relationship with acne. They believed that the real problem was that all milk contains testosterone-like hormones and these hormones can cause acne to breakout, especially on girls. A more detailed study found that the girls who drank the most milk had about 20% more pimples than girls who did not drink milk at all.

What The Nestlé Company Says About Milk And Acne

You might think the world’s largest producer of milk and powdered milk products might come to the defense of milk for kids and teens. 👦👧 But in 2011, the Nestlé company itself offered an explanation of why teens who drink milk tend to get more acne.

Milk products elevate insulin levels after meals. Milk does not contain insulin, and even if it did, the insulin would break down during digestion. However, the whey in milk stimulates the release of insulin and and substance called insulin-like growth factor-1.

The growth factor reaches the skin and locks on to the part of DNA that encodes a regulator gene, so that it cannot release the compounds that limit the skin’s production of sebum.

The skin produces more sebum, and pores that are already clogged form whiteheads and blackheads. If these pores are infected, they may also form pimples.

The same kind of result can occur after using large amounts of whey powder to make smoothies or eating protein bars after working out. The insulin-stimulating effects of whey are helpful after a workout 🏋️ because the insulin that is released after eating the bar helps the muscles absorb the nutrients they need to remodel, enlarge, and strengthen themselves after they are stretched to their maximum capacity. But the effects on the skin are mostly detrimental.

Is It A Good Idea To Cut Out Milk From The Diet To Prevent Acne?

This means that teens who have acne need to avoid products that contain whey, such as:

If there’s still a problem, then cut back on other kinds of cheese and finally on milk, ice cream, and yogurt.

There is, however, to have your whey and eat it, too. Work for it.

The very best time to consume any kind of product containing whey is right after you workout doing resistance exercise, lifting weights, or doing any other activity that causes a “burn” in your muscles.

For about two hours after this kind of workout, the muscles are about 50 times more sensitive than usual to insulin. They need insulin to help them absorb the glucose, amino acids, and water they need to repair damaged fibers and to grow larger.

Consuming whey products right after a workout helps your muscles and doesn’t hurt your skin, but they need to be consumed during the first hour after your workout, not during or before. 🍗🥕🥝🥤 It’s still OK to take other foods and beverages that don’t contain dairy.

Comments 4
Related acne articles:
Are There Really Foods That Cause Acne?
Many teens and young adults who experienced acne “back in the day” were told to stop eating certain foods such as chocolate and crisps. This...
Sugar and Acne: Don’t Worry, You Don’t Need to Go Sugar-Free to Get Clear Skin
Sugar and acne can be related, but because acne is influenced by so many factors, unfortunately cutting sugar out of your diet won’t suddenly give...
Comments (4)
Add Comment

i have a dry skin , non of my family member have acne nor in there teen age time .. but im the only sister whose havin acne from back almost 01 - 02 yrs .. yes i drink milk in morning on empty stomach and before going to sleep .. does this really cause my acne .. i mean sometyms .. my skin looks clearer bt .. sometyms i dnt even lyk to c my face in the mirror .. please advice me your best tips .. i fed up of my breakouts .. im not at all having oily skin.. to wash my face in the morning i use demoviva soap for clearing my marks .. in night before sleep i use milk + n yellow daal .. n wash my face with it .. advice me with best tips plz

I have been battling acne half my life. Then I came across an artical discussing the connection b/n acne and milk. my overweight sister loves junk food but stopped drinking milk pre-teen. She never had a pimple in her life. I cut out milk. im clear now

I am a 27 year old male who has suffered from acne since I was 13. I have proba my spent over 10,000 on doctor consultations, pills, lotions, ointments, etc, all with temporary solutions. It NEVER occurred to me that my breakout could have been caused by dairy (milk, they protein, cheese, yogurt, etc). Until 9 months ago, when I tried to quit dairy, in less than 2 weeks I started to see my face clear, and under 1 month all acne was gone!! I tried multie times experimenting to be sure, whenever I had a slice of pizza, or a cheeseburger or a cup of ice cream, I would 100% get breakout within. The next 24-48 hours!! This is not psychological, but self experience. I never liked milk by itself, but I am a huge fan of pizza, ice cream and cheeseburgers. Which unfortunately I can't have. Again, do NOT listen to what people tell you, if you have been dealing with acne for a while, try quoting dairy (completely) for 2 weeks and see the results!!