Is There Really a Link Between Ice Cream And Acne?

We all know that acne just isn’t fair. It messes up your skin. It can ruin your social life and bring your romantic life to a halt.

A widely-held belief for years has been that junk food makes acne worse. Now a study conducted by scientists in Malaysia concludes that, especially for people who have Asian skin types, ice cream aggravates acne.

What’s the issue with ice cream for people who have acne?

The problem with ice cream for acne seems to be its contribution to a dietary measurement known as glycemic load, rather than just a problem with milk fat.

In other words, low-fat ice cream is just as problematic as the “good stuff.” And there is a hormone in most dairy products that activates the production of pimples, although there is one form of dairy that is safe for acne sufferers.

So how can people who consume dairy and ice cream help their skin clear up faster? 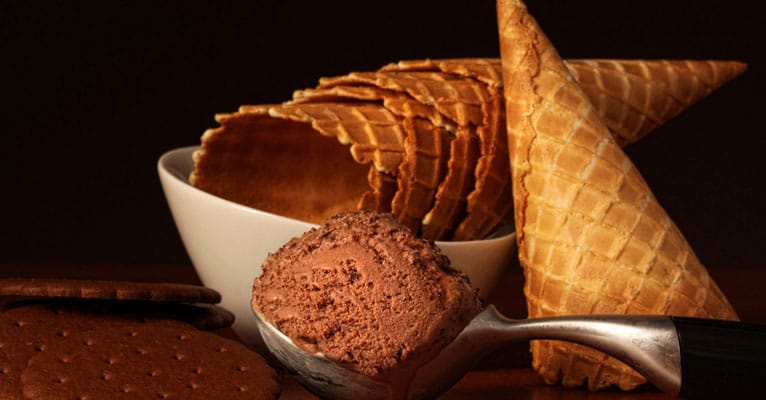 Most dairy products contain a hormone that activates the production of pimples.

First, of course, try to cut down on ice cream. (We know, this is not the news you want to hear.) Next, start a simple, repeatable skincare routine with proven results. (We recommend the Exposed Skincare routine, but more on that later.)

Ice Cream and Acne: Why It’s Worse Than Other Junk Food

Before about 1970, every acne sufferer used to be told that the key to a clear face was to avoid consuming soft drinks, any kind of chocolate, any kind of nuts or peanuts, and all fried foods. (As hard as it may be to believe, fried foods, due to lingering food shortages, were considered a luxury at the time, and many people seldom ate them.)

When skin care researchers did careful testing of the effects of these products on real-world acne sufferers, however, they found that, for the most part, carbonated beverages, chocolate, peanuts and tree nuts, and even fried foods high in saturated fat had no consistent effect on acne.

Instead, a series of research findings from around the world began to point to dairy products as a trigger for acne outbreaks.

What is it about cow’s milk that makes skin break out? Most cow’s milk products are high in a naturally occurring hormone called insulin-like growth factor-1, abbreviated IGF-1. This is not a hormone that is artificially added to milk or that is injected into cows. It’s a natural growth factor that the mother cow provides her baby calf that stimulates cell growth. After all, if you are a calf, and you need to grow into a cow, stimulating cell division is a good thing.

But if you are a teenager or adult dealing with acne, hormones from milk are just about the last thing you need. The same IGF-1 that helps a calf develop into a cow stimulates the growth of skin cells in the lining of pores, and it can induce sebum production as well. The pores in the skin in the face, neck, and trunk gets clogged, acne bacteria accumulate, the immune system tries to remove them, and pimples result.

How Big Of A Problem Is IGF-1 In Acne?

Studies in South Korea and Malaysia, which deal with acne sufferers who have Asian skin types, have found that there is a clear relationship between the consumption of milk, especially of ice cream, and the development of acne.

Studies of acne sufferers in the USA, which were not limited to any particular skin type, found that women who drink two or more servings of skim milk per day (from which fat would not be a problem) were 22% more likely to develop acne vulgaris, the common form of acne, and 44% more likely to develop cystic acne, the form of acne that is extremely difficult to treat. But one other aspect of diet can make the problem even worse.

Most dairy products aggravate acne because they contain an “insulin-like” growth factor. But the pore-clogging effects of the insulin-like hormone on the skin are augmented by the insulin produced by the body.

Unless you have type 1 diabetes, your body makes insulin that moves sugar out of the bloodstream and into every cell in the body for use as fuel. The pancreas releases insulin in pulses timed to keep blood glucose levels more or less constant. Most of the time, it stores insulin into tiny packets.

About 90 minutes after you eat (specifically, when your gut begins to expand with the digested food released from your stomach), the insulin-producing cells of the pancreas break open those packets to release a surge of insulin into your bloodstream to move the digested sugars where they need to go. As a side effect, the temporary surge in insulin produces a temporary surge in the product of skin cells in pores.

Ice cream doesn’t just provide the insulin-like growth factor-1, it also stimulates the body to produce actual insulin. Ice cream aggravates acne through not just but two hormonal processes, three studies have confirmed. The more sugary foods you eat, the more insulin your body has to make, the more your pores are stimulated in ways that leave them clogged.

Frozen Yogurt Is Not As Bad For Your Skin

All of this makes ice cream a no-no for acne sufferers. But you don’t necessarily have to give up all your frozen dairy desserts. Frozen yogurt is still OK, but sugar-sweetened non-dairy desserts such as sherbets and sorbets also add to glycemic load, thus stimulating insulin production and aggravating acne.

The process of making yogurt breaks down the insulin-like growth factor-1 that is found in milk. And because the process of making yogurt also converts some of the naturally occurring sugars in milk into lactic acid, yogurt is digested more slowly. The more slowly your stomach releases digested food into your small intestine, the less insulin the pancreas releases into your bloodstream, and the less your pores are stimulated to clog.

How To Get Rid of Acne

Ice cream isn’t poisonous. A little bit now and then, even if it’s chocolate, isn’t likely to cause you to break out. But if you just have to have a frozen dessert every day, make it frozen yogurt rather than ice cream.

Next, start a skincare routine that is proven to work. We recommend Exposed Skincare because 98% of users saw clearer skin in 30 days or less. Exposed products are formulated to address all of the different factors that cause acne.

We also like how the company combines low levels of acne-fighting ingredients with natural botanicals. This combo helps get rid of acne without irritating your skin with harsh ingredients. Click here to see the different kits that Exposed offers.

Exposed Skincare users see results fast.
Comments 0
Related acne articles:
Finding the Truth About Milk and Acne
If you live in the United States or Canada, you get bombarded with two kinds of information about milk and dairy products. 🐮 The milk...
Are There Really Foods That Cause Acne?
Many teens and young adults who experienced acne “back in the day” were told to stop eating certain foods such as chocolate and crisps. This...
Comments (0)
Add Comment
Cancel reply