How to Treat All Kinds of Nose Acne 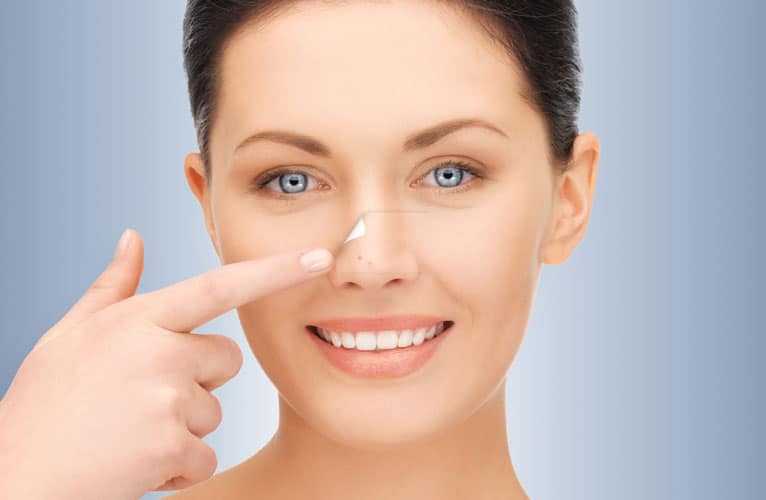 Two Types of Acne on the Nose

The nose is part of the “T zone” in the middle of your face, along with your brow, which generates the most oil. It is also rich in capillaries just under the skin. Sometimes these capillaries can break and leak blood, covering the nose with tiny red spots, or bruise, creating purple streaks. In severe cases, capillaries can accumulate scar tissue causing a condition of bumps on the nose known as rhinophyma.

When excess oil collects in pores on your nose, the problem is usually acne vulgaris, or common acne.

This kind of acne has its own telltale signs:

When tiny red pimples pop out on the nose and across the cheeks in just minutes, the problem is more likely to be rosacea. Rosacea has symptoms that distinguish it from common acne.

Cleansing Your Skin to Prevent Common Acne on Your Nose

Cleansing Skin on the Nose Affected By Rosacea

Rosacea is caused by broken blood vessels. There is absolutely no way you can rub, scrub, or wash it away. In fact, the more pressure you put on the skin of your nose, the more likely it is to break out. For rosacea, mild cleansers are best.

Detergent cleansers like sodium lauryl sulphate and anything that makes your skin red—especially cinnamon oil—can make your nose break out in unsightly pimples.

If you have rosacea, you need to use a gentle, anti-inflammatory cleanser. It may also help to use facial waters (mineral waters containing magnesium, selenium, and/or sulfur that are spritzed onto your face after you cleanse and pat it dry).

The nose is especially sensitive to sunburn. People who have rosacea often have the type of skin that never tans and always burns, and needs protection from the sun. Unfortunately, most people who have this skin type are determined to get a tan to make their acne less noticeable, and venture out into midday sun to try to do it. The result is only more rosacea plus sunburn and wrinkles. Because sun exposure weakens the collagen around blood vessels, the more sun someone who has rosacea gets, the more pimples will break out, too.

What If You Have Both Kinds of Acne on Your Nose?

It is possible to have blackheads, whiteheads, and pimples caused by both common acne and rosacea at the same time on the nose. If this happens, it may be helpful to use a very mild cleanser like Aveeno Ultra-Calming Foaming Cleanser or Eucerin Redness Relief Soothing Cleanser in the morning, 🌄💧🌛 and the very mildest formulation of benzoyl peroxide you can find in the evening.

Intense pulsed light treatment (which is provided by a dermatologist) can get rid of enlarged vessels on your nose. However, the treatments can be expensive, can have side effects, and are often not covered by insurance.

i never get pimples but off late i've been getting small pimples only on my nose and after a certain point it turns red and never goes off. i get these frequently. they dont seem to be fading. can you please help. i need a solution to get rid of it and remove the ugly marks.

apply toothpaste on it

Actually I have been getting large and infected pimples on my nose since last 3 years! I just want to get rid of them! I just hate them so kindly help me to find a helpful treatment for my pimples.. Thankyou!

I know exactly how you feel and I am sooooo tired of this!!!

Even I m facing the same since last 4 years

Hey I'm a 16 year old and for the past 1 month I'm having pimples coming oout on my nose everyday its disgusting n makes ugly apperances on my nose in the day plz help me thank you.. Plz help me with something that wouldn't cause more break out or blister for my face

hello: i'm a 60 year old male and have always been ridden with acne...very bad in high school years ago, and then slowing down as i got older....as of late, i've been getting large "under the skin" pimples just on my nose that eventually get white heads...all on the ball of my nose, front and sides....very red and sore...could have several at a time, resulting in it looking like what my wife calls "drinkers nose"...please help, it looks aweful

Me too. I'm 53 and having the same exact problem. Did you find a solution. My nose fucking hurts. I'm in show business and it's a real nuisance to deal with this. It's been happening for about a year now. One flare up after the next.

Go to your GP and tell him you want to try Oxytetracycline tablets 1 in morning and 1 in evening. Metrogel works wonders for redness on nose. Just rub gently on affected area before sleeping.

I get whitheads and pimples on mine I had one whitehead before and i picked at it till it bled bad idea i know but its gone!!!!

I am 22 yrs old and i have acne prblm on my nose for last 3 yrs..i have been getting large pimples on my nose n after waking up in morning i found its shaped enlarged, i have tried so many medicines, it gets oily only on nose and small yellow pigment comes out whenever pressed..plz plz give me any idea to ovrcome frm this situation...plz

yes me to my nose sore breaks out i use peroxide I m 59, need help been to doctor sold me $200.00 ointment made it worse Help!!

I always have blackheads on my nose and every once in a while little red white heads that are easy to get but it is the blackheads that bother me. I don't know how to get rid of them! I am blessed to not get any acne like my friends in school but if I look in the mirror I see the tiny black indentations from the blackheads. Somebody help. I have tried every acne and blackhead cleanser out there.

U can solve the problem by your self. Before the pimple shows on the skin. U start feeling pain or lite red skin. Just apply your saliva on it. Yes u read it right just by applying your Saliva after every 1/2 hr your can get raid of it. And the morning salive before brushing is 10 times more Effective. Avoid after eating oily food for an hour as your saliva .avoid applying any thing which contains oil . Whatever the reason is. It works brothers.

Using saliva does work. I thought at first that was outrageous but it works. Also; keep an eye on what you eat. I find eating red sauces and spicy foods makes my face breakout quickly.

My nose seems shiny but very dry and its like darker than the rest of my skin and has lots of whiteheads, blackheads, and some red bumps. I've tried so many things but lately, I've just stopped putting anything on it but water. I honestly don't know what to do anymore besides visit a dermatologist.

friends I tried this and it works 100% guaranteed

What did you try? I am having the same problem and nothing is working.

i am experiencing swollen nose but i think it's a pimple in side,my doctor gave me augmentin but seems not working,also prescribed me with ointment bactroban ...

I read that applying triple antibiotic ointment works. It's an over the counter item and I started last night. It seems a little better this morning. It's been said that this kind of thing might be a staph infection also causing allergy like symptoms.

I am 18 years old and since last year my nose has been gaining blackheads and whiteheads but now and then my nose swells up and hurts tried many creams and they all work for a while then they start making my nose swell plz if u have any advise on how I can get rid of this !

I started getting these and they haven't stopped. My nose uaed to be nice and clean, then i turned 13. They start out as red marks that if i touch, hurt. Then they just grow, stay for about a week, then go. BUT, they leave a dark mark where they were. Wtf!! I'm not ugly and this stuff makes so damn depressed to show my face. Damn. Please tell me how to QUICKLY get rid of it.

I'm 16 and I have had acne spots on my nose for the past 4 years , they just won't bloody go away its so irritating because I have no confidence at all anymore and my local gp is rubbish aswell cos I've been there 3 times since and all they're medicine have not worked at all can someone please help me for the love of God

I started using the indian aztec healing clay and mix it with braggs apple cider vinegar. it works really well Im sixteen too.

I get nose pimple once in a blue moon. But I wash face prior going to sleep with Salicylic acid Body wash morning & night . Also use a little benzol peroide cream on nose if I get pimple or feel I am getting pimple. I only get these when I am totally stressed out. I eat loads of vegetables specially spinach & carrots plus vitamin A. And drink loads of water. I avoid chocolates & dairy products if skin is bad.

I have small areas of rosacea on my nose and upper cheeks. If dermalmd rosacea serum is used consistently I found that it did improve the appearance of my skin, which now requires using less makeup. Great product, fair price!

Hi! I only breakout on my nose it's disgusting because everyone look right at your nose. I've been getting these bumps/pimples since the 6th grades and now I'm in the 11th and they won't leave me alone. When I picked at them they turn black and get really ugly. Sometimes they leave a scar I just want my nose to be as clear as my face

Try to wash twice a day with dermol 500 lotion available from Tesco or thru GP.

Dermol 500 lotion is to be used as a face wash

BEST WAY (personally) TO GET RID OF PIMPLES!!!! What I do is I take a hot, damp wash cloth and pat my face with it. DON’T RUB. This opens up your pores, allowing you to cleanse them.I then use a facial cleansing milk or wipe and gently rub that in. Then I let it sit and take some liquid soap and wash my entire face with it. Be careful, this can dry it out. Rinse with cold water. This closes your pores, helping them block out any dirt and bacteria or get clogged. I then moisturize and apply aloe vera gel on the effected area (my nose). Adjust this to your skin type (oily, dry, etc.) I hope this helps!

I started getting these red big pimples on my nose And I got one a few months ago and it was huge and red & it wouldn't go away .. so I I kept putting a hot wet towel on it to pop it .. well I popped it and now it's still bumpy and red but doesn't be hurt . BUT last week I got ANOTHER one above the last one and it's red but small and I'm scared it's gonna get big Someone help me !! What should I do ?